This tutorial describes an example RNA-seq expression analysis. First, the analysis phases are presented step by step. In the last page, running this kind of analysis in CSC environment (as a batch script) is described.

In the current tutorial, the tools are run in a virtual machine image downloadable here. Part of the analysis is done in R (also available in the virtual machine). The virtual machine mimics the CSC environment (Puhti supercomputer): later, when the Puhti-shell environment is in use, these steps can be run there. Meanwhile, see the guide page for interactive usage of Puhti.

Note: we are currently updating this material! If you have questions, don't be shy to ask (see the biospecialists contact info)!

In this tutorial, you first start with raw reads (in fastq file), and learn how to check the read quality, (FastQC, PRINSEQ), trim bad quality bases (Trimmomatic), check the strandedness of the data (RSeQC), align reads to genome (HISAT2), assess alignment quality (RSeQC) and count reads per genes (HTSeq). The data for these first steps is a small subset of single end RNA-seq reads from two human cell lines from chromosome 19, h1-hESC and GM12878 (we practise with hESC sample). Note that when analyzing differential expression you should always have at least 3 biological replicates! We use this small dataset for the first steps of the analysis to save resources: running the exercises with full sample would take hours to complete, and the file sizes would require a lot of memory, making it difficult to run the analysis on a VM.

After these steps, we change the dataset, and perform the differential expression analysis steps in R (DESeq2, edgeR). Now we have a reasonable number of replicates, as the starting point of this analysis is the count table, and memory and running time won't be an issue at this point. This data consists of 10 human samples, 5 from lung and 5 from lymph node. You start with a count table and a phenodata file, which describes the samples.

In the batch job section, where we learn how to effectively analyse the data in Puhti, we use again subsetted fastq files. You perform the first steps of the analysis (from fastq files to count tables) automatically for the single-end hESC and GM12878 samples as an array job using a batch script file. You can practise modifying the batch script for two of the paired-end lung and lymphnode samples, which are already subsetted so that they only have 200 000 reads.

The analysis pipeline is illustrated in figure 1. 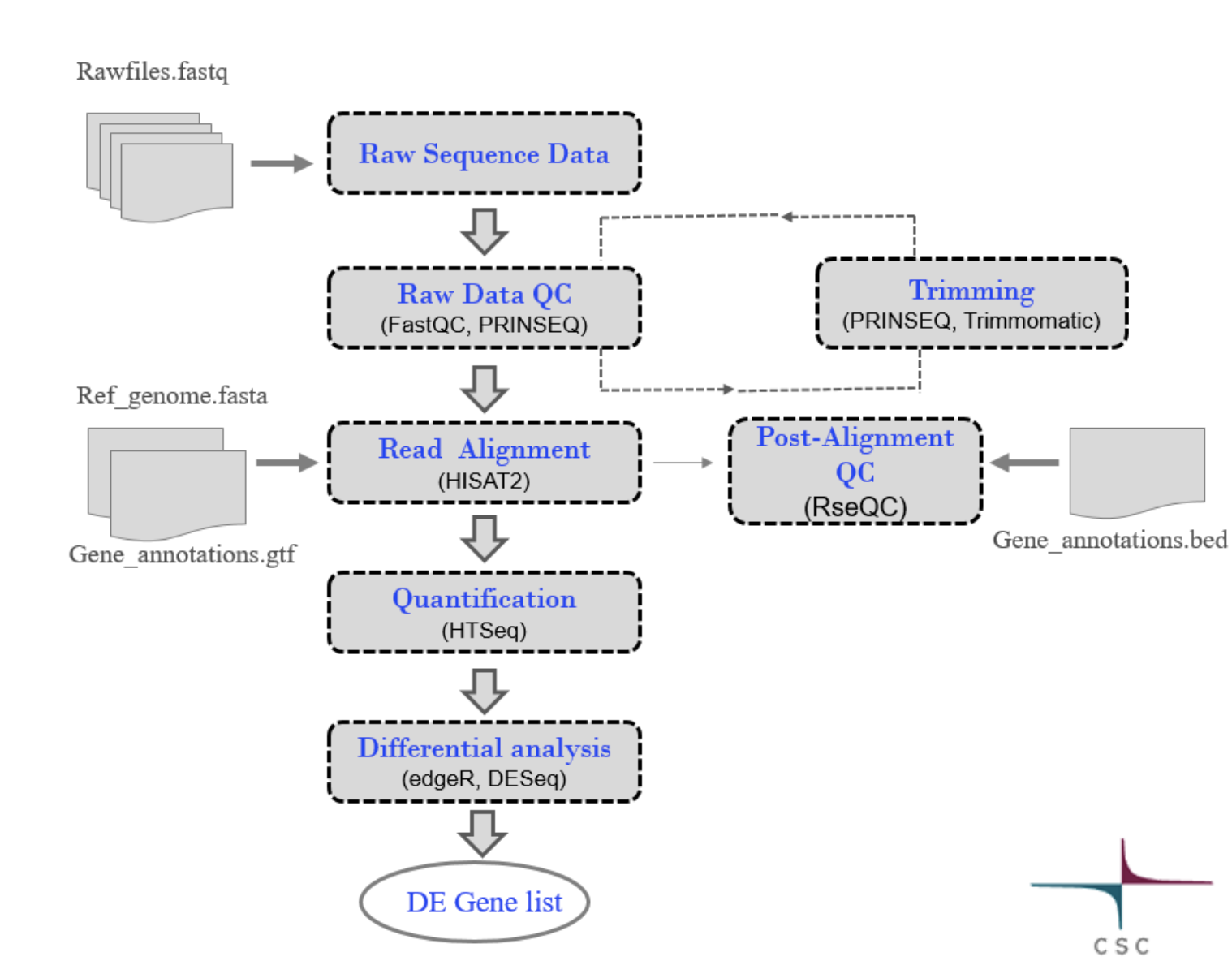 Before starting the tutorial,  you need to perform following preparatory steps:

For this tutorial, we have prepared a virtual machine (VM) that includes all the softwares and tools needed. The virtual machine has an Ubuntu Linux operating system. You can open the VM on any computer that has Virtual Box installed and enough memory. The VM runs on top of the host computer, using the hosts resources, but you can think of it as a separate computer: you can't access the files from the host, and when you want to close the host computer, you need close the VM too.

Download the virtual machine image (rna-seq.ova -note, in the course, this is already done for you!), and open it in Virtual Box. The password for the VM is rnaseq. Tune the window so that it fits nicely on your screen (see options in "View" tab, try for example Auto-resize Guest Display, and put the Scale Factor to 100%). If you notice that your mouse starts to behave strangely when using the VM, try changing the window size: this usually resets the mouse.

Retrieve the input data for the tutorial, unpack it, and rename the folder as rnaseq.

Move to the rnaseq folder and check the files you have there.

You can open the same folder in the virtual machine user interface: go to Files -> Home -> rnaseq.

3. Load the conda modules that contain the analysis tools that you need in the tutorial

Next, we use the Conda package management system and load a module called rnaseq. This loads all the pre-installed softwares and tools we need to our use. When using Puhti, we do something similar with the module load commands.

You can check the existing conda environments with command:

The analysis steps can be found in the following pages: